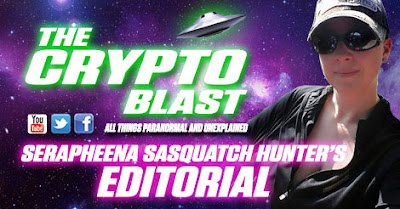 I was asked today why Bigfoot research groups and researchers in general were “light on women researchers”.  When you sit down and tally it all up, men compromise the bulk of Bigfoot researchers. Further the bulk of core or lead researchers in most well known groups are also men.  So I sat down to begin to look at the questions and began to put my thoughts on paper… and WHAM… schmack in the middle of doing so, I receive a PM on Facebook from one [name withheld] of Washington State...


Our conversation more accurately pointed to what I think is one of the biggest issues with females in the field of Bigfooting; it’s not just that there are less of us, but more importantly it’s how we are perceived, treated and accepted in the BF community. So I refer you back to the conversation I had while in the midst of writing this.

DUDE: Oregon has a Bigfoot


DUDE: U in Oregon


DUDE: I’m in Washington State. Are you single?


Me: (instantly irritated and not just by his typing) WTF does that have to do with anything?


Me: Why would you even start a conversation asking that and what does it have to do with BF?

As a female Bigfoot researcher, whose Facebook profile denotes that status, I have equal if not more people contact me to discuss my relationship status than to discuss Bigfoot, my education or relevance to this field. I have received PMs asking my relationship status, I have been offered sex, sexted without warning, asked out, had my breasts complemented, told I have a nice figure, etc. What’s ironic… I do not dress “sexy” and I do not portray myself in that light. I am more often pictured in camouflage, boots, no makeup, a hat and my gun strapped to my side. If you see pictures of me at BF events, I rarely dress up and am usually the overlooked female in the crowd (and I prefer it that way). I am not catty, I don’t seek attention and generally like to cut it up as if I am one of the guys.

If men in the Bigfoot community, old and lecherous, young and hot or everything in between see and take every open opportunity to “get it on” with the female researchers in the field, we are clearly NOT being looked upon as equals or as having equal relevance in what we offer to the Bigfoot community.  Good ole single [name withheld] and I have 46 mutual BF friends on Facebook and he contacted me to discuss my relationship status, not Bigfoot. Seriously??!!!

There are some very amazing, analytical, well educated, well rounded FABULOUS women in the Bigfoot community. Amongst the well known research groups, very few seem to equally include women, with the Olympic Project being a shining example of a diverse group that includes women. The female Bigfoot community at large includes geneticists, hair analysis experts, forensic collection experts, anthropologist, primatologist, biologists, animal behavior experts, nurses, hunters and naturalists. Added to their amazing skill sets you can include outdoor experts with many thousands of cumulative hours on the ground in the field.  These women deserve to be treated with respect not messaged to see if they are free for a Friday night romp in the woods. We have so much to offer this field and that should not be overlooked simply because we have boobs and might be single.

To the douchey Bigfoot forum crawler(s) who contact(ed) me, female Bigfoot researchers can shoot, shovel and shhhhh and spend a lot of time in the woods ….. Remember if Bigfoot doesn’t scare us, busting into a male dominated field doesn’t either.  ;-)

Posted by The Crypto Blast at 8:00 PM