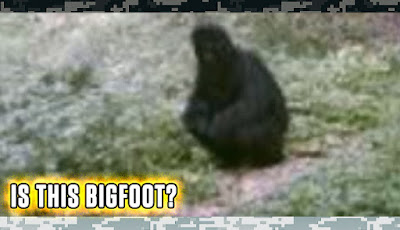 Doesn't it look like this Bigfoot is taking a s$&#?

My Mike Mullen from City News

Speaking of s$&#, is this piano music bed really supposed to evoke a woodland beast that's survived for millenia without leaving a single corpse in the scientific record, thereby setting up the possible if not likely reality that Bigfoot is, in fact, immortal? Is ascribing lousy taste in music our way of looking down our nose at the "missing link"?


How can we tell this "image" was "captured on a trail cam in Minnesota"? Does anyone recognize anything in this photo aside from vague hints of the colors green, yellow, and black?

Why do all those colors wash out, and why does the image become very bright around the 24 second mark, but only briefly? Did you guys notice that too?

Is that close-up supposed to... help?

Has this really been watched more than 15 thousand times since Monday? Does anyone believe this "video" proves anything except people are superstitious, incredibly bored at work, and just looking for anything to click, even if it means risking another of Timmy's fingerpaint series of Bigfoot pooping set to lousy piano?

You're still gonna watch it though, aren't you?

Source: City News
Posted by The Crypto Blast at 7:00 AM