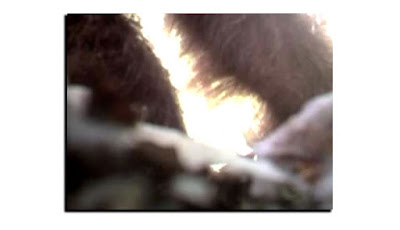 A Northern California man called the Sasquatch Chronicles radio show to share an amazing video of what he believes to be a Sasquatch tampering with a game trail camera.

A truck driver, former 20-year police officer & game warden, the man known only as Dan, spoke with Wes Germer of The Sasquatch Chronicles. Openly interested in Sasquatch since a young age, Dan is often a resource for friends and colleagues who experienced unusual activity in the wilderness. A colleague of his close friend provided this compelling game trail video that depicts a hairy being piling leaves upon a camera.

Drug Smugglers or Sasquatch?
The video was recorded “27 miles back in the Sequoia National Forest” in the Southern Sierra Nevada mountains of California. Once activated by movement, the camera records video for 5-10 seconds to conserve SD card memory. According to Dan, the purpose of the motion-sensor game camera was to identify drug smugglers and illegal growing operations.

“I have a friend that was assigned to a government task force” he explains, “and he had a buddy who had been assigned to guerilla grows in Northern California. A guerilla grow is where the cartels grow in the furthest reaches of the forest. The further from civilization the better.”

Only accessible by all-terrain-vehicle for twenty miles, and by foot for seven miles; the trail camera was discovered on the ground in a leaf pile upon monthly retrieval. It had been ripped off the tree. The ten second video recorded on the motion-triggered device shocked the federal agent and mystified Dan.

“They brought it to me and I looked at it. It’s not conclusive but it looks like a bipedal animal. It definitely looks to me like it’s standing bipedally.” He explained. Dan further theorized that the subject in the video “purposely placed the camera in the leaf pile, grabbed handfuls of leaves and put them over top of the camera. It was like an intelligent attempt to conceal the trail cam.”


Why Would Bigfoot Dislike Game Cameras?
Several theories try to explain why Sasquatch would be averse to game trail cameras. Many suggest that the creatures note the infrared light and purposefully avoid or attempt to dismantle them. Others simply believe that Sasquatch maintains such a strong awareness of its surroundings within seasonal movement range that a large foreign object like a camera on a tree indicates an imminent human threat.

In this case the creature could have been very upset that this odd, foreign item suddenly appeared within its home-range. Imagine if someone walked into your home and placed a motion-triggered camera on your wall. Many believe that even minimal human activity in their territories is considered offensive. This includes assemblages of hunting blinds and platforms, significant movement of rocks and downed foliage, and even urination. It sounds bizarre, but these are the places where Bigfoot live.

While likely a bear or perhaps a person in a Ghilli suit, both Dan and Wes Germer lean towards Sasquatch as the culprit. The ‘playful’ way the subject drops leaves and attempts to bury the camera intrigue the two men: “It really reminded me of an orangutan sitting throwing leaves almost on top of the camera.” Wes explained. “And that’s a damn good suit.” He added.

Both men believe a hand can be seen in the video. While not among the all-time best videos of Sasquatch, Dan’s 10 second clip provides serious intrigue and should inspire more research efforts into the deeper sections of Sequoia National Forest.

Source: Ghost Theory
Posted by The Crypto Blast at 7:00 PM