Interview with a Skeptic: Steven Kroll 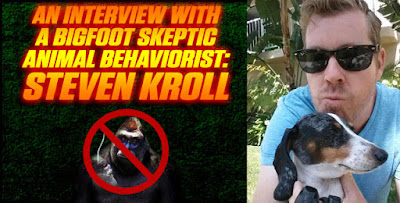 Steven Kroll resides in Los Angeles and has worked with animals for 7 years. We wanted to interview him here at The Crypto Blast to get some fresh ideas from someone that isn't obsessed over the hairy creature known as Sasquatch, an animal that science has yet to prove is real.

We began the interview with: Why don't you think Bigfoot is real?


Lack of physical evidence. I am a skeptic on any claim that is made without strong evidence to support it.

What are your thoughts on the Patterson Gimlin footage?


It's quite a famous and fascinating film and it has been a while since I have discussed it with anyone. I think it's a clever and well executed hoax.

So are you a skeptic because science has yet to accept any evidence? Or are you just dismissive about it in general?


Mostly the former. But if a discovery were made that changes everything we ever believed on the subject, I think it would be exciting.

So do you think people like Matt Moneymaker from Finding Bigfoot and Rictor Riolo from Bigfoot Bounty are wasting their time?


No, I admire their passion. Sure, they might be chasing shadows but passionate people often make discoveries that change the world's perception on a subject.

As of late, there seems to be a popular group think that Sasquatch can cloak, give you mind speak which is a form of telepathy, transform into orbs of energy, and can teleport themselves inter-dimensionally. Have you heard about these claims?


Yes I have and I do find that silly. People love nonsense, especially when it fits into their narrative of what the world SHOULD be like.

So does your nonsense answer also coincide with UFOs? Loch Ness? Ghosts?


Loch Ness and ghosts, yes. UFOs, well, there are lots of things in the skies that are unidentified so that term should not automatically mean extraterrestrials. Our universe is massive, and with the amount of other galaxies that are undiscovered I'd say the likelihood that we are alone in this universe is most highly unlikely.

So Loch Ness? Yet there is more documented sightings, videos, reports, footprints and collected, however circumstantial, evidence for Bigfoot?


I think, like you said, circumstantial. And probably fabricated.

So Loch Ness and Bigfoot are under the same category for you?

I think they are both non-existent.

We showed Steven the Freeman footage and this is what he thought of it:


Never heard of this. Could just be friends of his in Chewbacca costumes for all we know. It is pretty low resolution. It's different from the Patterson Gimlin film because there's audio. Looks like an outtake from "Blair Witch".

What about all the different tales from the Native Americans? Don't they hold any value for this creature being possibly real?


In regards to the tales told by the native American people, they are just stories at the end of the day. They are wonderful story tellers with a oral history handed down to each generation. That doesn't prove bigfoot is real

What's the one surprising thing you have seen with animals in your career?

I was surprised at how massive the pet care and dog training industries really are. Maybe it's because I am in a big city that is very pet oriented. I would have gotten in this field much sooner had I known. Working with animals has shown me that they leave a physical record. Bigfoot doesn't do that, now does it?

Well, he stumped us with that one. We thank Steven Kroll for this talk. The search for truth continues...
Posted by The Crypto Blast at 5:00 PM