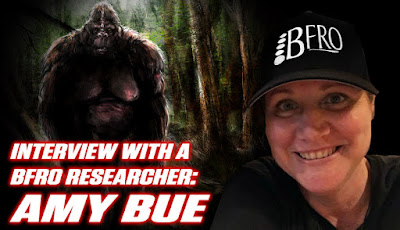 Who is the Ohio BFRO researcher Amy Bue? First she's a mom, second an English teacher, an aspiring novelist, a cancer survivor with an enormous bucket list, and is a total optimistic realist. As far as Bigfooting goes, she would describe herself as someone just coming out of the novice stage. She soaks up everything she can from those who've been doing this a lot longer than she has. She reads. She bops around the different Facebook groups to see the latest news. and goes to seminars and expeditions. She also helps with the phenomenal Ohio Bigfoot Conference. Most of her witness reports have been in Mahoning and Columbiana Counties, but she will travel wherever the action is. Most of all, she gets out into the woods so that she can make up her own mind.

Amy, you describe yourself as someone coming out of a novice stage of Bigfoot research. What stages are there?


That's a good question, and that was probably a poor choice of words. What I meant by that comment is that I feel like I am finally at a point where I have some decent background knowledge combined with personal experience when it comes to the world of Bigfooting. Compared to where I started, which was pretty much knowing nothing, I would say that I can now hold a decent conversation with those who have been doing this a lot longer than I have. There will always be people who know more about the history of Bigfoot than I do, but that's fine with me. I make up my own mind about things, and I learn and experience as much as I can. I'm comfortable with my progress.

Some people say Bigfooting is just glorified camping. You’re camping for a cause. Is there a difference?

That depends. Honestly, there are times when I go camping--either by myself or with fellow researchers--when it is all about relaxing and having a good time. It depends on what group I'm with. Some are there for fun and excitement. We may throw in a little bit of hiking and looking around, but our purpose during those times is not to research anything too seriously. At other times, though, and especially with my main group, we get down to business.

What is your must have item while out looking for Sasquatch? Can I say more than one?

I always have my headlamp, my voice recorder, my knife, and my measuring tape. Oh. And my notepad and pen.

What motivated you to join the BFRO?

The people. 100%. The Ohio contingent of the BFRO is made up of some of the best people I know. I trust them with my life, and I admire the heck out of each one of them. Mark Maisel has done a phenomenal job of putting together a group of researchers where every member is there for a purpose. Even better, they are my friends. I also became interested in the group because of its reputation of being thorough and professional. I'm a natural skeptic, and I like the fact that we deal with data.

What do you think Bigfoot is?

I wish I knew. My gut feeling is that they are some kind of undiscovered primate. Eyewitness reports, footprint casts, the P/G film....all of those lead me down that path. I am, however, smart enough to know that gut feelings can fail us. I'm willing to go wherever the evidence takes me in the future. I will never claim to know everything, and my mind is very open to other theories if they come to fruition.

If you could create the perfect research team, who would it be?

That's a hard one! My Ohio BFRO team and other Ohio researchers would have to be in there. The guys from The Ohio Night Stalkers. Those guys are on a quest. They took me out for my first night of research, and I owe them a lot. But in addition, I'd include Dr. Sarmiento for some extra skepticism, Dr. Meldrum, Nicole Law, Charlie Raymond, Jamie and Jenny King, Cliff Barackman and his Orang Pendek trackers, John and Winona Kirk, Jane Goodall, Todd Prescott, and Les Stroud in case we get too lost. And Rictor Riolo, of course.

Rene Dahinden searched Bigfoot his entire life and never had a sighting. Are you okay with that similar scenario happening to you to?

I'm absolutely ok with it. You may not know it, but I DID see something in 2012 that started me on this journey. It was too far away to be sure of what it was, but it was the bug that bit me. You know how they say that if you love your job, you'd do it for free? It's the same here. I'll do it even if I never see a thing. It's the thrill of the chase, isn't it?

How are you able to balance all this weird Bigfoot stuff with being a mom and a teacher? Do people think you’re crazy?

Yes. Yes they do. The good thing is that I don't care what other people think. The great thing is that middle schoolers love to hear about my adventures, no matter how crazy they think I am. I've filled a lot of indoor recess time with question and answer sessions. I've also been known to have them write mini research papers on the topic. They really get into it. I balance Bigfooting with the rest of my life by making sure that I'm choosy about how I spend my time. I could go to a Bigfoot event almost every week if I wanted to and if I had the resources. And that doesn't even include my own personal time that I want to go out and research. I make sure that I limit my outings. My daughter is 20 now, so since she wants to be off with her own friends, that has opened up a lot of time for me. While she was out of the country last year, I spent a lot of my summer traveling around New York, Kentucky, Pennsylvania, and Ohio with just me and my tent doing research. I'm lucky to have that extended break.

According to the BFRO website, Ohio has more Bigfoot sightings than Oregon. Why is that? The numbers are: Ohio 267 – Oregon 243.

I'm not sure. The ratio of true wilderness to people living there could obviously have something to do with it. But my fellow BFRO researchers in Ohio do a great job of getting the word out to the public about what we're doing. I know a lot of eyewitness accounts have originally popped up at library lectures. Personally I have had a few witnesses come up to me when they've noticed my hat when I'm out and about. That's the primary reason I wear it frequently. These people hadn't contacted anyone about their stories, but they saw me and I guess I must be approachable. I also think that we could have more people contacting us in Ohio because it is a whole lot stranger to think of Bigfoots in Ohio than in Oregon. Don't you think so? People expect there to be stories coming out of Oregon. But Ohio? If someone here sees something, they're going to want answers. I sure did.

Where do you stand on the KILL or NO KILL debate of Sasquatch?

No kill. It's not a debate for me. What are some of the major shortfalls of Bigfooters? Oh, boy. Are you trying to get me in trouble? I'd have to say that the Bigfoot world is really a microcosm of the rest of humanity. There are braggarts. There are people who think they know everything. There are egos. I have met some Bigfooters who suffer from overenthusiasm. When you go out with them, they see Bigfoots around every corner. It can be amusing, but it isn't very productive. On the flip side of that, I just had a conversation with an employee at Salt Fork State Park, where The Ohio Bigfoot Conference is held every spring. She said that we are their favorite group to have in the lodge because we're fun, courteous, and just good people. Most Bigfooters that I have met are good people.

How do you aspire to be different from all the rest?

I'm just out here doing my thing. Love me or hate me, I work hard and I don't lie. I have no agenda when it comes to Bigfooting. I'm just out there like most of us are--looking for answers.

Bigfooting is a male dominated field. As a woman, what do you bring to the table? Does gender make a difference?

I remember the first Ohio Conference I attended. There were definitely way more men than women, but we're out there. We have that intuition on our side. Or maybe you should call it street smarts. I believe it's a real thing. Think about it. As women, we could be walking down a city street by ourselves in the dark. Believe me! We are going to be aware of our surroundings. We have to be. Now put us in the woods and that same awareness is present. Bea Mills and Sybilla Irwin....THOSE are two of the women I would want with me. Whip smart and super intuitive. As for the men, I have never...not once...felt like the guys I research with have treated me differently because I'm a woman. They are my brothers and at least in Ohio, Bigfooting is an equal opportunity arena.

What would you say to yourself now, if you could, when you were just starting out?

In your opinion, how come Finding Bigfoot hasn't found him yet?

They're the same as the rest of us. And who says they haven't?