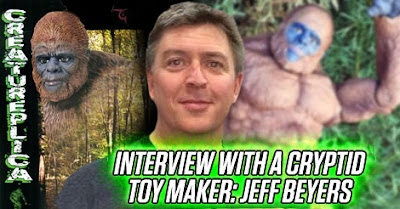 What began in 2000 and manifested itself in 2014 has taken the cryptozoological world by storm! No conference or paranormal event is complete without these action figures on display. Meet Jeff Beyers, the man behind Creature Replica. The toy company that gives you the monsters from your dreams!


What was your motivation for wanting to make Bigfoot and other cryptid/monster action figures?


It's our way of being a part and doing something positive within the Bigfoot/Crypto community. I have some of the same scars as others who came across the Patterson Gimlin Film and original Boggy Creek Film etc. When I was younger and I have always wanted to see some really serious cryptid inspired toys produced. Co-owner Jean St. Jean and I both felt the same since a young age. Up till the past few years I personally had never had any real Bigfooting experiences, that has since changed. It is such a passion now! This is Jean and they guys and I's way to leave a lasting impact on the topic, something that grabs the attention of the adult and child as well. Something respectful to the topic that will be around for a long time. We are so proud of what we have accomplished so far and what we have planned for the future. 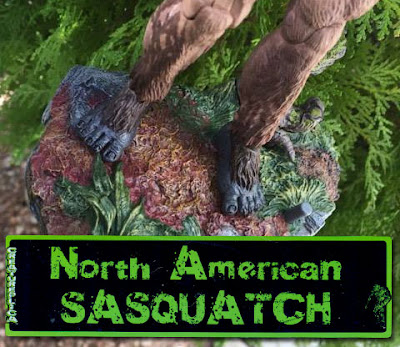 We here at the office opened the North American Sasquatch action figure and have been posing him all day. We really admire his gluteus maximus. Was there a particular inspiration for this beast?


Yes, Both Jean and I studied Native American folklore, the works of some of the icons in the field and as many accounts as possible to get a snapshot of what the North American Creature looks like, even speaking to witnesses. Things like the head set low on the shoulders was one of the common observations. With Jean's knowledge of human and primate anatomy he understands that the gluteus area of a Sasquatch would need to be impressive. Lots accounts out there of the "ripped" appearance as well.

Jean St Jean is the co-owner and sculptor. Jean, a veteran in the field, has been sculpting, designing and prototyping toys for around 22 years. 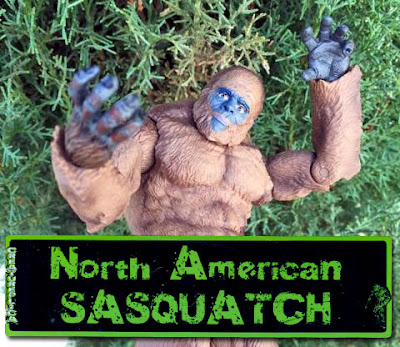 What kind of work goes into making a single 7” figure?


After the research portion which can be months or years in the Sasquatch case, Jean and I decide on a basic look. At that point Jean takes over and begins to sculpt the prototypes. Jeans vision brings the creature to life. Tweaks happen during that time and Jean engineers the joints and articulation as it will appear on the final product. Jean pretty much works his magic. (did I mention he is a genius?) Once several working prototypes are completed we begin the paint studies. Jean does this at his office, I had the privilege of doing the paint on several of the exclusives in wave 1.

Once we have what we like, painted and unpainted castings head to the factory so steel molds can be made. From that point on its test shots every step of the way until final units are produced that are perfect in color and movement. Then we are off and running with packaging with the same system of test shots. I do the graphics portion. At that point, the other two co-owners, Craig Deere and Nick Epley come in and handle the business portion. Overseas wires, shipping from factory to port, then overseas landing in Long Beach, insurance, fights with US Customs (don't get me started on that) and then trucking them to our warehouse. Then the real work begins – marketing and shipping!


We also did a special run for Horrorhound Magazine out of Cincinatti. A spin on the Horrorhound action figure. I did a Zombie paint job in a run of only 450 that were only available to VIPs for one convention. We did 8 total figures in wave #1. We have several figures ready to rock right now, yes. This next wave will be contrasting to what we have done for sure. Priorities change from day to day. Not sure what will be the first out of the gate, but an alien gray is in the mix for sure. We have several statue type works happening as well right now. We have signed the NDA so we cant talk about them all, but the first is the Mothman Statue we did for the Small Town Monsters documentary. So far that project is exceeding everyone’s expectations. We really like collaborating with Seth Breedlove and the gang at STM (Small Town Monsters). 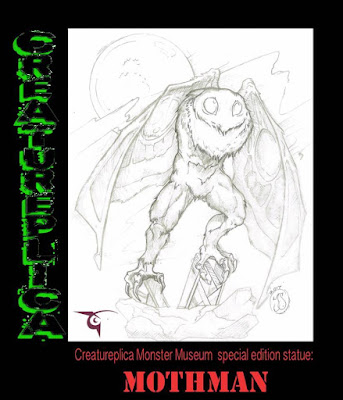 Visit Creature Replicas today!
Posted by The Crypto Blast at 7:00 AM