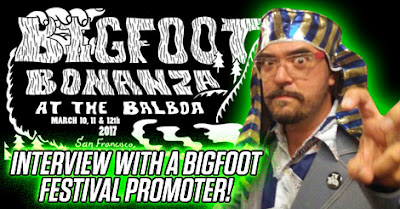 The Bigfoot Bonanza film festival is fast approaching and we here at The Crypto Blast wanted to interview the man responsible for the 3-day Sasquatch event that in San Francisco. Kai Wada Roath. Who is he? What's he about?

Who is Kai Wada Roath?

I have always been interested in monsters and would say in all honestly have mostly traveled to collect folklore stories rather than hide behind a tree with night vision glasses ( which I have done, but very lazily).

In 2000, I led a 5 week expedition in Nepal with some friends, collection Yeti stories. I got a lot of advice from Peter Byrne and used his Sherpa guide and loosely followed the tracks of one of his Tom Slick expeditions in the Arun Valley. Before leaving on that trip, I also had many phone calls with Dahinden, Krantz and Green...which were all quite a story each on their own.

I grew up as a kid in Eureka, in Northern California, and I will never forget being 8-10ish years old and eating at an old diner in Willow Creek at night and over hearing a table talking about Bigfoot. Then when we were leaving, I remember my Dad making a turn and our car's lights beamed at Jim McClarin's statue... and it left an impression on me.

I work for a travel adventure company which gets me around the world a lot.

But before working here, I still would travel as much as I could.

( I've searched for Blackbeard the Pirate's treasure in North Carolina, been cursed by entering King Tut's tomb, spent a month on Easter Island, traveled all over Transylvania collecting gypsy folk tales...and bladdy-bladdy-bla... (I don't want to sound like i'm bragging, it's so tough talking about yourself... ugg)

I also present movies at the Balboa 2 times a month with my Super Shangri-La Shows, were I show movies I love that will rarely be seen on the big screen anywhere else in San Francisco. 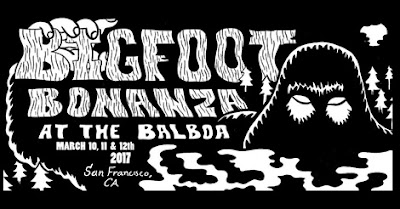 Kai, Bigfoot Bonanza is coming! Your two day Bigfoot film festival is set for March 10-12… what’s it like putting together something big like this? Is this your first time?

Putting this event on has been nothing but fun... so far (I play in a few bands and put on shows times to time, often with a theme for the evening). The Bigfoot Bonanza will be 3 days of classic 1950-early 80s movies and documentaries (the only new ones shown this year will be Craig Flipy's Crappy Little Dreams and Seth Breedlove's first 3 films).

I've been friends with Craig Flipy since the 2003 Bigfoot Symposium and I just met Seth in Ohio over Christmas, but really liked his films a lot and thought it would be fun for him to be out here and show his movies on the west coast.

Yes, that would be great exposure for Seth.


It all starts Friday March 10th and goes till late Sunday night.

There are two screens in the theatre and different movies will be shown at the same on both screens, so if you don't like one movie you can take your beer to the other one or mingle in the lobby and talk Bigfoot with all the other folks.

All of the speaker and myself will have tables selling collectible goodies, books and rare casts.

Some movies will only be shown once, others twice. The Legend of Boggy Creek will be shown all three days.

You, Kai, have gone searching for monsters in real life. Can you tell us about that and where you went? And did that experience fuel your Bigfoot fascination even more?


As of late, I have searched for ghosts more than other monsters lately, as there are so many haunted restaurants, bars and historic hotels in San Francisco.

Just a few months ago, I did an investigation with the San Francisco Ghost Society of the 91 yr old Balboa Theatre, where the Bonanza will be held, as I thought we would only contact the 1 known resident ghost... we stumbled on a few more who do not want to leave the theatre. All of them seemed friendly...but is was totally spooky. We will find out if they like Bigfoot movies soon!

I also did spend a full day of fishing for the Blue Lake Monster in Northern California with a giant home made hook and a huge ham hock 2 years back.

One of our personal favorite Bigfoot movies is Legend of Boggy Creek. And to this day I think it still hold up (simply because less is more when it comes to showing the monster). What are some of your favorite pieces of cinema curtailing this hairy beast? Also of Note readers, Legend of Boggy Creek will be playing on the first day at the theatre at 12 midnight! Talk about a perfect, scary midnight showing folks!


My personal favorite film we will be showing over the weekend is the 1957 Hammer Film, The Abominable Snowman. 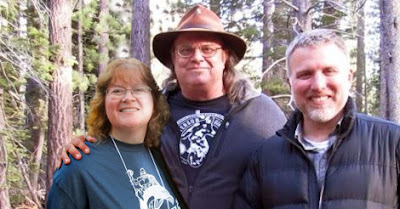 Slated to be there at the festival is Finding Bigfoot’s star. Cliff Barackman. We have seen his presentation’s before, your audience is in for a real treat! Archaeologist Kathy Strain, who is a personal hero of ours, is the Obi-wan Kenobi of the Bigfoot world, and Tom Yamarone is the Bigfoot world’s fun campfire folk singer. How did you go about selecting these people? What was your vetting process and inspiration?

Cliff Barackman will have a different talk with the audience all three days and it will be great to hear Kathy Strain's presentation. I was very impressed with her talk at the Bigfoot Symposium up at Willow Creek back in 2003. I was also impressed with that amazing salmon dinner they had!

Tom Yamarone is really fun and I met him some 10 years ago in Cliff's backyard one day when I lived down south. If I remember right, we all just drank beers and Cliff made us all copies of some of his tracks.

In fact, I have Cliff to thank for giving me many of my casts, which led to a new hobby of collecting rare tracks.

I picked these three speakers because quite frankly, because they are all humble and fun and I thought it would be a great group to spend a weekend with.

One thing that I look forward to is meeting the people from near and far coming to the event (including you).

I always like to say, Friends of friends that you've never met, are bound to be new friends.

At the end of the day, what do you hope your audience members will walk away with from the 2-day Bigfoot Bonanza film festival?

I love history, and feel monsters are an important part of it.

At the end of the weekend, I hope people to say... See you next year on the Barbary Coast!

Kai, thanks for taking the time to do this interview with us. What is the motivation behind your motto, “support your local monster”?

Support your Local Monster! That is one of personal favorite lines, as well as Keep Folklore Alive! Two things that I just think are important to do.

What more can you tell us to help people come to this event?


There are some motel discounts on the bigfootbonanza.com website.

I suggest spending the extra bucks and staying at the Seal Rock Inn, just don't mention the Bonanza, as they do not like to cater to events, in fear of cancellations or after parties... which I hope there will be a few!

The 3 day pass is really the way to go. I made the tickets a scheap as I could to cover all my speaker costs and stuff.

Whatever this makes I'm splitting in half with the theatre.

Friday ticket and the three day pass include 2 free tacos and 2 free beers on Friday night!

Plus there will be a live jug band Friday, Hiroshi Hasagawa's Poontang Wranglers and my friends awesome pop-up taco stand, Tacos Oscar.

And some secret surprises...

Also, there will be a Raffle for stuff folks will want with raffle tickets only $2 (money goes to a good cause).

Posted by The Crypto Blast at 5:00 PM