Interview with an Archaeologist: Kathy Strain 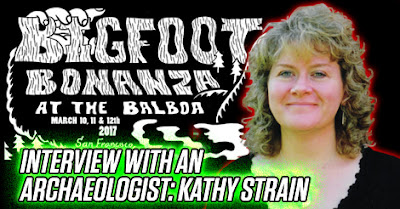 You have seen Kathy Strain on multiple Bigfoot documentaries, America's Book of Secrets and on the series Monsterquest. The author, researcher, the native american historian, is here to talk about her work and what to expect at her speaking engagement that happened this past month at the Balboa Theatre for  Bigfoot Bonanza.

Who is Kathy Strain?

Let me give you some facts about myself that others might not know. I am a fabulous cook. I love to vegetable garden, but kill all house plants. I am very well known for my skills at making homemade jam, jelly, pickles, and tomato sauce. I am a scientist at heart but I will cry at sappy things. I have worked for the US Forest Service for 27 years, striving to do the best work I can to protect heritage resources (prehistoric and historic) and Native American rights (which is hard to believe since I am only 30... not). I met my husband at a bigfoot conference. All my closest friends are bigfooters... not sure I know anyone normal. But one of the facts I am most proud of is I am the grandmother of a tiny tornado named Matthew. He will believe in bigfoot whether he likes it or not!

You have quite the history with Bigfoot. Your critical research was rewarded with quite the sighting. You saw not just one, but two creatures. AND you went running after them! Can you tell us a little about that and what was going through your head at the time?


I will be discussing my sighting at length at the event on March 11, so not to spoil the experience for those attending, I will keep it brief. Yes, I saw two bigfoot moving towards me and four other researchers. When I saw them, I jumped up out of my camp chair, yelled "there they are" and I ran at them. That, of course, just caused them to flee up a mountain side. Why did I run at them? I am not actually sure. I had always told myself I would never run away one and I had always hoped that if I could get close enough to one, I would grab some hair for DNA proof. I would love to say that I am super-cool-afraid-of-nothing kind of person, but I think it was just the excitement.

You have written a book called “Giants, Cannibals & Monsters: Bigfoot in Native Culture”, what was your motivation behind such a huge undertaking of collecting all these stories and legends from the Native Americans?


It all started back in 1992 when I started working with the Tule River Indian Tribe. Their reservation is the home of Painted Rock and the Hairy Man Pictographs (which is NOT open to the public). Although I had seen the pictographs many times before, it wasn't until the tribal elders told me more information at the site that I finally sunk in that Native people have a long and deep connection to bigfoot. I started collecting traditional stories from California. In 2006 or so, Craig Woolheater of the then Texas Bigfoot Research Center, asked me to look into southern stories for a museum display and talk. I started then to look at other regions and there you have it!

What is the one thing you want your readers to get from this collective record of Native Americans and Sasquatch?


That Native people have a long history with bigfoot and if you study their stories, you will learn a lot about bigfoot behavior.

Since you are a guest speaker at the Bigfoot Bonanza film festival in San Francisco (March 10-12), any hints as to what you might be talking about to tease the audience?


I am going to talk about my sightings (hint... 3 individual sightings) and how events can shape your life. I also want to talk about the application of science to bigfooting as well.

We think, to this day, The Legend of Boggy Creek is the scariest bigfoot movie of all time (simply because less is more when it comes to showing the monster). What is your favorite piece of Sasquatch cinema and why?


The Legend of Boggy Creek is the most awesome movie EVER!! I am the one introducing the movie on Saturday. I picked that time slot on purpose...come and find out why!

There seems to be many challenges in Bigfoot research facing citizen researchers. If you were to teach Bigfoot 101, what would be the first assignment for your eager students?


Learn what is typical in your area (animal behavior and sounds; food resources; natural tree falls; etc.). Less than .0001 of what you are seeing or hearing has anything to do with bigfoot - it is just a typical bird or snow-bent tree. I have no respect for someone who believes that every sound, bent tree or mark in the soil is caused by bigfoot.

There seems to be a major shift in critical thought over Sasquatch. White Americans are now saying Bigfoot is your forest friend. Yet Native Americans say he is to be avoided and a wild cannibal who will eat your children. What is the cause of this polar opposite monster vs Disney hypotheses?


Well, I am not sure it is just white Americans, but it is caused from a dearth of knowledge of science, too much television and the internet, and a complete lack of any connection with the wild outdoors. This weird process of ascribing "cuddly" human characteristics to animals and objects isn't found only in bigfooting though. People "Disney-fy" other wild animals (deers, etc.) or place (such as a forest because Bambi lives there). They have no clue that all wild animals can kill them or that cutting a tree, if done in the right way, actually benefits Bambi.

You have gone on the record for stating you are pro kill on After Hours with Rictor, a well known YouTube Bigfoot interview show. Do you still subscribe to that chain of thought? Has there been any repercussions for being public with the desire to murder the forest people?


Yes, I am pro-science. Science requires a body in order to determine that bigfoot is a species that deserves protection under the Endangered Species Act. I have never had any repercussions for believing the way I do. If you explain it scientifically, what is there to argue with?

Is Bigfoot your friend?

In all seriousness, what are the reasons for so many claims of people saying Bigfoot zapped them? Or experienced mind speak (telepathy), or seen bigfoot walk into inter-dimensional doorways, or transform into orbs of energy and fly away, or cloak and become invisible? You have some pretty high profile people who publicly say they have experienced mind speak. Les Stroud, the Survivorman, and Connie Willis from Coast to Coast AM, for example.


I think the reason is that they are experiencing or seeing things that they are not familiar with and instead of using logic to explain the event, they interpret the experience as literal. If I was watching a bigfoot and one second later it is not there, I might very well think that the bigfoot became invisible or stepped into a portal. However, if I used logic, I would conclude that bigfoot just stepped back into the shadows or is blending in with the vegetation...and then I would run at it!

Thank you for taking the time to visit with us today. You have been and will always be my Obi-wan Kenobi.


I see the check cleared...

Posted by The Crypto Blast at 6:30 AM