Interview with a Bigfooter: Rictor Riolo 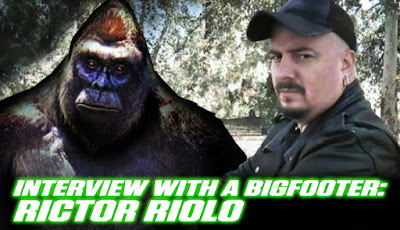 Today's Crypto Blast interview is with Rictor Riolo. Between his part on Spike TV's Ten Million Dollar Bigfoot Bounty, YouTube videos and Bigfoot artwork, this man has definitely made his mark in the world of Bigfoot.

What sparked your interest in Bigfoot?


I remember watching "In Search of..." as a little boy and the Bigfoot Patterson Gimlin episode came on. I recall being so scared, I was hiding in my dad's arms and I remember him telling me there is nothing to be scared of, "Look," he said, "it's just a man in a big monkey suit." He was right.

Have you ever had a personal Sasquatch experience?

I would like to think so, the optimist in me says yes... but there was no visual sighting with what occurred. Just footprints, screams, rock throwing, branch breaking and finding one hell of a stick structure. So I will not say it was a Sasquatch experience (Sorry Claudia Ackley. That doesn't make it Bigfoot).

What do you think the Sasquatch are?

Primitive hominids. If they are real, they are probably smarter than the Neanderthals. They knew to avoid us, even to this day. They are not your forest friends, sorry Suzy Matiash.

If you clearly saw a Sasquatch "cloak", in broad daylight... how would it affect you? How would it change your view of the world? Would you speak of it to anyone?

Absolutely I would speak of what I saw. Don't you people know who you are talking to? I am the loudest and most vocal Bigfooter out there. I would be your woo champion. But I wouldn't be engaging in online fights over it like some of the fucktards we know in the Bigfoot world. I would seek out the explanation for it. For example, a friend of mine claims to have been surrounded by Sasquatch with his brother and feared for his life. Some of you might figure out who I am referring to. Cough-cough, Sasquatch Chronicles, cough-cough... well if that were me and I were in that situation, I would like to think I would call every hunter or person I know of that has a gun of sizable nature and go right back to that same location the next night and go after those hairy mother fuckers! Derek, get your rifle! Tammy lock and load! Justin, try not to leave a body behind this time. I wouldn't just talk about it and make a show about it. To me, having that kind of a frightening encounter would make me want to blast the beasties to kingdom come. It's not like they were trying to feel Wes Germer up like they allegedly did to Dr. Johnson. Wes said he and his brother were scared for their lives. Fear makes you do strange things. Some people run from it. Others like me like to challenge it head on. Okay Mr. Bigfoot, you wanna to kill me? You better do it because if you don't, I'm coming back for your ass! The same goes for someone wanting to hit me. You better knock me out... because if you don't, you're gonna regret it.

Seeing something disappear right before my eyes would be life changing, absolutely. even in daylight. I would question everything like, are my eyes playing tricks on me? Did Michael Merchant sneak me a mushroom when I wasn't looking? Did I drink Dr. Johnson's Kool Aid? Am I going crazy? Things disappear on us all the time. Anyone who does laundry knows about missing socks. Is it paranormal? No. It's just us not keeping track of our surroundings. Sasquatch, if real, it is in their element. We lost that nature aspect of our ancestry when we became agricultural and city dwelling. So that is a factor in people losing touch of what they are seeing in the woods. Camouflage is wonderful thing.

I don't believe in cloaking. That's Star Trek. No animals cloak on this planet. FACT! Camouflage, yes. But we have yet to know of an animal that has hair to camouflage. Can Sasquatch be the first to do it? Absolutely. But cloaking is retarded and dangerous for the discovery of this species because no credible scientist other than the crack pot (veterinarian in Texas) is going to take it seriously. You have to play by their (scientists) rules if you want to prove Bigfoot is real. You're not special enough to go up against a system that is already in place and works. Sorry.

Also of note, if a creature could disappear like Sasquatch supposedly does, don't you think the military would be all over that shit for their weapons research and development? Think of the possibilities a creature that can cloak can offer our military. We are a warring state. Our military would be all over that. No question. So much for your forest friends.

What do you believe is your best work or contribution?

Damn. I would have to say After Hours with Rictor, the #1 Bigfoot Webcast. It's where the subject is taken seriously. It has been a journey, definitely. Second would be being cast on Bigfoot Bounty. Come on, an outspoken gay guy who doesn't hold back his tongue that's a bigfooter being cast on a bigfoot hunting show? That's a first. Third would be my artwork. My artwork seems to feed many egos in this field.

How has interacting with the Bigfoot Community, in general, enriched your life?

Oh good God. It hasn't gotten me laid yet. Granted I have had a few straight married bigfooters hit on me and make it clear they want to find something big and hairy... in my pants. I wouldn't say it has enriched my life. It has definitely made it fun, interesting and frightening at the same time. And painful. Yes, painful.

I have been known to say Bigfooters have a 6th grade education and that's a fact. For example, Bigfooters do not know personal boundaries. Aside from death threats and the daily hate speech I receive, the people coming to my work, coming to my front door, getting my phone number and harassing me, trolling online, do not come close to an alcoholic jealous Bigfooter destroying my personal relationship with someone I loved dearly. That has been the burden most hardest to bear. And it's the most painful and violating experience to happen to me in my life.

What Bigfoot researcher do you admire most?

If you had a gun at my head and told me to pick, I would have to say archaeologist Kathy Strain. Then followed by her husband Bob Strain, Derek Randles from the Olympic Project, Todd and Diane Neiss from the American Primate Conservancy, and John and Montra Freitas from Paranormal Journeys. Do you see any of them having personal monetized YouTube videos and trolling people? No. They set the standard and raise the bar. They're professionals. Have some of them defended themselves on Facebook? Absolutely, but it's not a daily occurrence.


If you had one, short message for the world, what would it be?

“Somewhere, something incredible is waiting to be known.” - Carl Sagan

About the interviewer: Suzy Matiash has been interested in Bigfoot most of her life. She was 5 years old when she had an experience that sparked her interest. She lives in Southern California with her family and has worked in the Banking Industry for the past 25 years. Suzy was also was an owner operator of a restaurant in Las Vegas for about 10 years. Suzy is a professional that likes to go Bigfooting for fun when not working.
Posted by The Crypto Blast at 7:00 AM