Interview with a Hoaxer: Rick Dyer 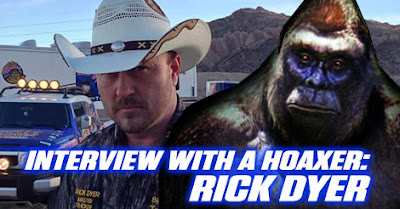 Today, The Crypto Blast interviews the bad boy of Bigfoot, the infamous hoaxer of 2008, Rick Dyer. The man you have seen on TV numerous times on the news and on documentaries. Love him or hate him, he doesn't care. Just know that he is here to stay and isn't going anywhere any time soon. So lock your doors, batten down the hatches, it's going to be a wild ride.

How did you first get started in Bigfooting?


While hiking in Tennessee (in 2008) something came over me and I started to think about Bigfoot... I guess you know the rest of the story.

In 2008, you and Matthew Whitton claimed to have found a 500 pound Bigfoot body. You were exposed as a hoaxer, but claimed that an unnamed government agency confiscated the body. Is that statement true? If it is, have you had any additional contact with them? If not, why did you continue the hoax?


The hoax fell apart because other people in the bigfoot community couldn't come to terms on the money. 2008 was a hoax... nothing more... Why stop? Everyone does it. I'm just the only one that can honestly admit it. Every Bigfooter tries to be like me in one way or another. They just can't capture the success that I've achieved. Everyone's a hoaxer in the bigfoot community in one way or another.


I haven't heard of Mark Wilkinson Wilkinson until now. For the Department of Justice to contact you a crime has to be committed. Common sense says no crime, no contact. These lonely people have too much time on their hands - nothing more.

You have been called ‘Liar Dyer’ and ‘The Boy Who Cried Bigfoot.’ What has changed so that you will now only speak the truth about Bigfoot and why should people believe you?


I've never ask anyone to believe me. The people who is asking you to believe them are the people you have to watch out for.

Some call you a con-man and say you have been arrested for eBay fraud and assault. Yet there have been no charges against you. Once it's on the Internet, it seems to stay there forever. How have these slanderous claims affected your projects and home life?


It's a free country people can post whatever they like, true or not. None of the false claims posted about me has ever affected my projects or my home life.

We have noticed that you are never the first one to provoke others. Quite a few people have made a name for themselves at your expense; making blogs, videos, showing up at your house, etc. Why do you stick around if this is constantly happening to you?


Everything is to my advantage. People have been riding my coat tails for years. To be perfectly honest I look at them as my free employees. "It doesn't matter what someone says apart you as long as they spell your name correctly." If possible keep them coming.

You were once acquainted with a questionable individual from Maine, Michael Merchant from the controversial Facebook group, Team Tazer. Can you describe your involvement with him and what was the end result?


We actually worked together in stirring up the bigfoot community. Faking fights and so on... the end result was... I just stopped returning his calls.

So Michael Merchant is a fraud?

What is the one thing you want our readers to know about you and your philosophy on Bigfoot?


Bigfoot is awesome! On September 6, 2012 I had the experience of a lifetime! And another thing, let's talk about "The Woo" and their leaders, they're going after weak minded people that want to be a part of something.. Oh great...it will just keep getting more and more crazy. I expect something big will be coming for the Woo... Open the flood gates of crazy!

Tell us about Adventures with Rick and Jeremey.

We should be finishing up at the end of next month with "Bigfoot Adventures with Rick & Jeremey". We are also in an upcoming movie "Interview with a Monster" with comedian Tom Green and Stacy Brown Jr. from Bigfoot Bounty. Plus I have many upcoming mainstream projects!

Any last words before we end this interview?

Bigfoot should be fun, enjoyable and bringing people together not a constant fight.

Check out my Rick & Jeremey fan page at: https://www.facebook.com/RickandJeremey and BigfootRick.com. Don't forget to subscribe to my YouTube channel.
Posted by The Crypto Blast at 10:01 AM