Interview with a Bigfoot fan boy: Henry May 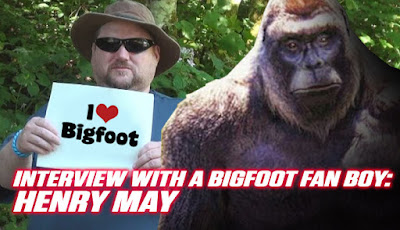 In the world of Bigfoot, there is one super Bigfoot fan boy by the name of Henry May. He's the second best walking Bigfoot encyclopedia (Bigfoot Books' Steven Streufert owns the crown). Henry is a staple in the world of Sasquatch because he makes videos discussing books, TV shows and shares his opinions on his YouTube channel frequently.

Henry May, you have been a super Bigfoot fan boy for many years and have turned into quite the celebrity. Conferences and get-togethers are not the same unless you're there. You make videos discussing current events and give book reviews. So what got you started? Where was your beginning? Tell us about your initial sighting. Was it what got you interested in Bigfoot?


It all started with a program I am sure you and all of The Crypto Blast readers will remember called, The Six-Million-Dollar Man, when the late wrestler Andre The Giant played the Bionic Bigfoot (those white eyes have haunted me for 40 years!), and that was February 1976. My initial sighting took place nearly 8 years after I began to be interested in the subject, in the state of Georgia in the town of Woodstock. It was late-January 1984, and it was around 10:30 PM Eastern. I was on an elevated patio behind our house, and I began a whistling call or cry, because I had read in some books about these creatures making that noise. To my surprise, I received a response. This went on for about two minutes, then I spotted at a distance of 50 yards, a shadowy figure swaying back and forth behind a residence. Then it moved to its left (my right) and came up under a porch light, where I saw a strangely human-like face on a figure that probably stood around maybe 6 1/2 feet tall and was a rust-brown color. I stared at it for about a minute, and it was looking directly at me. I was scared so I went back in the house.

Over the years social media has influenced bigfootdom quite a bit. Is it a good or a bad thing?


It is a bit of a double-edged sword. It can be helpful as far as networking and for reports, but it is also a cesspool of some of the worst trolling and misinformation imaginable. I do wish that was an aspect that could be eliminated, but it seems to be a part of this crazy world we call Bigfooting, so it is something we have to deal with on a daily basis.


On opinions changing on researchers and videos and theories over the years, the only thing I can think of is just two short years ago I announced I was pro-specimen, that we should bring one in for scientific study. However, I am changing that position again to no-kill, BUT I would not get angry if someone DOES bring one in.

What's your fondest memory when it comes to Bigfoot conferences and get-togethers?


My fondest memory of a Conference was attending the first Yakima Bigfoot Round-Up in 2009 where I met so many great Bigfooters, including 3 of the cast members of Finding Bigfoot (Cliff, Barackman, "Bobo" James Fay, and Matt Moneymaker). But of course meeting Bob Gimlin was the highlight of that weekend, and having been around him several times since then has been great and inspirational.

If you were in a debate and were pro bigfoot being real, what would be your platform? You can't use your own personal sighting as a reason.


In a debate, I would certainly be pro-Sasquatch and my platform would probably be something like "Bigfoot: Finally something to believe in."

If the Patterson Gimlin film were to be revealed a hoax, after all these years, would it destroy Bigfoot? And would it change your opinion on Sasquatch?

The Patterson/Gimlin Film is a thorny subject for certain in the Bigfoot field. I have examined all the arguments for its authenticity and against it, and to me, though it is the most important piece of wildlife photography ever, if it were proven a hoax, it would not bother me all that much because of my experiences with the real-life creatures, which to me trump the film. BUT of course I think the film shows a genuine Sasquatch.

Who is your favorite Bigfoot researcher and why?


My favorite Bigfoot researcher currently would have to be a group, not just one researcher, and that group is the Olympic Project. The research they are embarking on is to me very impressive and they are certainly objective and scientific and not given to wild speculations or wishful thinking.

What is your favorite Bigfoot book?

My favorite Bigfoot book would definitely have to be John Green's Sasquatch: The Apes Among Us, but there are so many other great books as well. But certainly any of John Green's books are recommended reading.


The thing I have learned that I would pass on would be to do your homework, and don't give yourself to wild speculation and wishful thinking. Read everything on this subject, but take some of it with a grain of salt. Not all of it is accurate or credible.

Over the years, what has been the one thing you have learned in the world of Bigfoot that you would like to pass on to the next generation?


The thing I have learned that I would pass on would be to do your homework, and don't give yourself to wild speculation and wishful thinking. Read everything on this subject, but take some of it with a grain of salt. Not all of it is accurate or credible.

Thank you for taking the time to chat with us today Henry.

You are quite welcome!

You can visit Henry May's YouTube channel here.
Posted by The Crypto Blast at 8:00 PM