Editorial - The Fall of Kelly Shaw 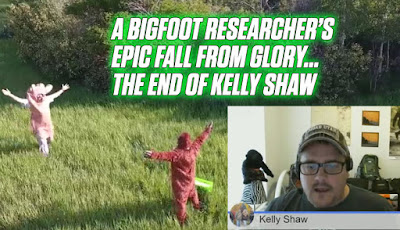 When it comes to bigfooting, gullibility and idiocy will always bring down the mighty self proclaimed bigfoot researcher. This week's editorial comes a tad bit early...

A bigfoot researcher by the name of Kelly Shaw from Utah pretty much destroyed his bigfoot career/reputation/integrity/whatever by claiming the Idaho bigfoot drone hoax to be real.

Kelly Shaw, the main personality of the Rocky Mountain Sasquatch Organization, is known to spend more time attacking others on the Internet, claiming to be a real researcher and slandering others like the Bluff Creek Project's Steven Streufert. I have witnessed this over the past year and a half by watching his behavior on Facebook.  Shaw even went after my associate and cousin, Rictor Riolo, on Facebook: 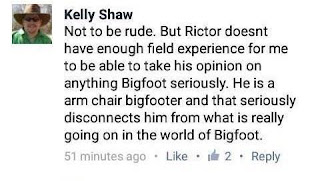 Here is the drone footage that Kelly Shaw single highhandedly shamed himself on by claiming was real:

Now it appears that when it comes to Bigfoot YouTube personalities (which Shaw and Riolo are, in all reality), it's an opinion war, a battle of insults and grand standing. If anything, these men are competing for YouTube hits. It's a popularity competition. At the end of the day, they are actually doing a service to bigfoot. How so, do you ask? They are keeping the legend alive because Sasquatch isn't doing it himself.

Posted by The Crypto Blast at 3:34 PM